3 Common Causes Of Electrical Hazards And Their Solutions

Home / 3 Common Causes Of Electrical Hazards And Their Solutions

3 Common Causes Of Electrical Hazards And Their Solutions

Electrical malfunctions are not good for any of your appliances or yourself. Even what seems to be harmless fluctuations can cause great damage. It is not easy to answer which electrical devices have been harshly affected by the small disruptive surges without an inspection. Except if you are an experienced electrician who happens to know a lot about possible damage to specific appliances under various situations.

Around 1,000 deaths are recorded every year in the United States as a result of electrical casualties and around 30,000 cases of non-fatal electric shocks. If electrical incidents are happening a lot in the main electric panel of your household or many appliances have been malfunctioning more often then, the issue is one of the followings:

The basic function of a circuit breaker is to protect your house circuit from damage due to overload. This way it becomes a valuable asset in your electrical safety precautions. However, not everyone is aware of its significance but the people who know its importance never really care about the level of danger they have been putting themselves into without circuit breakers. Unless they encounter an unpleasant situation, which is why it is suggested to let an expert electrician inspect the condition of your electric panel and suggest upgrades. You will be putting many lives in danger by not having RCCB (Residual Current Circuit Breaker) in your electric panel, especially for appliances that require steady high voltages. Such as microwaves, air conditioners, refrigerators, etc. In the worst scenario, your whole electric services panel may set ablaze frying all your house wirings and intensely damaging most of your appliances.

In the case of a faulty RCCB, the risk is the same: it holds the power to cause severe damage to your main electric board by frequent tripping. Sudden fluctuations will never keep the current supply steady. This is why you should always check your electric service panel on schedule. So that you will know in time about the faulty RCCB before it causes any destruction.

This is not always the reason but in often cases loose wires cause a lot of wear and tear to electrical appliances. Sometimes damaged wires draw higher power because they can’t maintain a healthy flow of energy through them. Also, it is sometimes the case that non-compatible material of wire i.e., non-copper is the reason for higher electric bills. There are a couple of materials that are widely used in wires silver, aluminum, and copper. Only copper is the favorite due to its distinct features.

Other than the chance of getting electrocution or an electric shock loose wires can also start a fire. Also, it is natural that many people don’t understand the effect of a single deflected electric device on the entire electric system. This is why it is suggested to regularly inspect your main panel for possible loose connections. 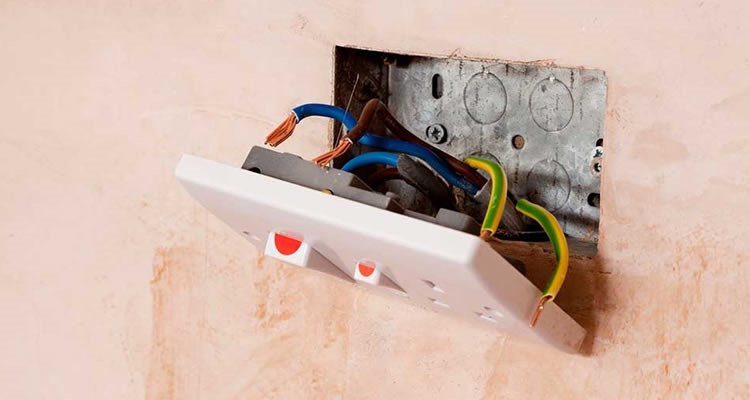 A wire is connected properly but is damaged by multiple spots or you have a backstab switch these cases need to be dealt with as soon as possible. Otherwise, with a slight accident, you will have your hands on a fatal threat from a live wire. In the case of a backstab switch when neutral and hot wires aren’t placed properly this also holds the potential to start a fire.

Also, even accidentally, if a damaged live wire gets in contact with wet hands, the body will suffer a great electric shock. As water will increase the conductivity factor and the outcomes would be devastating.

The most compatible and preferred material for electric wires and cables is copper. Aluminum doesn’t hold much current carrying capacity as copper does. It lacks stability and durability, which are distinctive factors in choosing wires and cables for a new construction site whether residential or commercial. Choosing the right material for wires can reduce your electric bill to great extent.

There are a few known household problems that are solely related to power issues in your home electric panel if there is no confirmed problem from the supply source origin.

Slight fluctuations in the main power supply and the transfer of electricity to homes and offices can be one of the reasons for damaging heavy appliances like air conditioners, refrigerators, etc.

The following are the problems sags and surges cause in a normal household or office:

Electrical overload happens when current passes through wires more than their capacity. This makes the wires and cables hot enough to melt and start a fire. The most efficient solution is to unplug devices when not in use. Doing so can protect your appliances from slight surges and sags. Damaged or faulty wirings are also one of the reasons to cause power surges or sags. If you hear buzzing in your sockets or notice frequent tripping of circuit breakers faulty wiring might be the victim. Sometimes these wires also detain the power to cause severe internal and external burns on the human body.

Natural reasons are the most common origin of power surges. If your heavy appliances don’t have surge protection then you should own a habit of unplugging them when not in use. Otherwise, when the lightning strikes the power line or grid station it will create a vast amount of voltage increase that your electric system won’t be able to handle. In whatever case, natural causes are inevitable so it is best to develop habits to avoid maximum damage for the safety of your loved ones.

Having the desire to switch your appliances ON or OFF instantly can cause severe damage to your appliances and wirings in the long run. Switching an appliance or electronic device ON/OFF always creates a noticeable power surge but it can be controlled with some precautions. Such as using highly efficient electric devices that create lower surges, installing surge protectors, unplugging the devices that aren’t in use especially during stormy weather, etc.

Flickering in a conventional fluorescent bulb can be a sign of dying. On the other hand, if your LED lights are showing flickering whenever you turn on AC, motor, or microwave that is probably due to voltage issues. If it’s just for a second or two there won’t be anything to worry about. But if it starts happening more often or for longer than a second then, you should call a professional electrician to inspect the situation, just to be on the safe side. For a traditional light bulb, a loose connection could also be a reason for frequent flickering, the electrician may also check its condition. Sudden high voltage one time might not be damaging for the electrical devices but if it picks the habit of it then it would easily fry the circuit of your appliance. There are some practices that one can adopt to save electronics from severe damage. Such as:

Installing surge protectors prevents the wires of your appliances from frying, melting, and starting a fire.

A mainline stabilizer safeguards your house or office from a steady low voltage current supply.

Develop the habit of unplugging the devices from the switch socket when the appliance is not in use.

In case you witness anything that might seem hazardous or anyhow related to one of the above mentioned problems, contact experts like Your Electricians before the situation gets worse. Never try to repair any electrical issue yourself if you don’t have the skills because it may seem easy but the consequences could be fatal. If you are a professional then you would already know the threats of not using the proper safety equipment and the right tools.